My theme is not working

I made the gemspec settings of the theme I made and uploaded it to rubygems. But even though I opened a new jekyll blog and typed my own theme in gemfile and config.yml settings, I could not run it. Is it because of the spec.files field specified in gemspec?
Do you have a useful document that I can read while publishing a theme? I would be very happy if you add it here.

Too little information to help you here, buddy.

From our previous interactions, I know that your theme is for private consumption only. So, I won’t ask you for the name of the gem you have uploaded to Rubygems.org.

What exactly do you mean by: Theme doesn’t work?
Was there an error? Was it working as expected on local machine but not on GitHub?

Give us as much information as possible. Like, what exact steps were followed to create, test and publish (as a gem); Warnings / error messages in terminal; Ruby version, Jekyll version, etc, etc.

@ashmaroli
This is my backup theme: 0x364 | RubyGems.org | your community gem host

After uploading this theme to rubygems, I want to pull the theme to my blog site that I created locally, but it gives some errors. 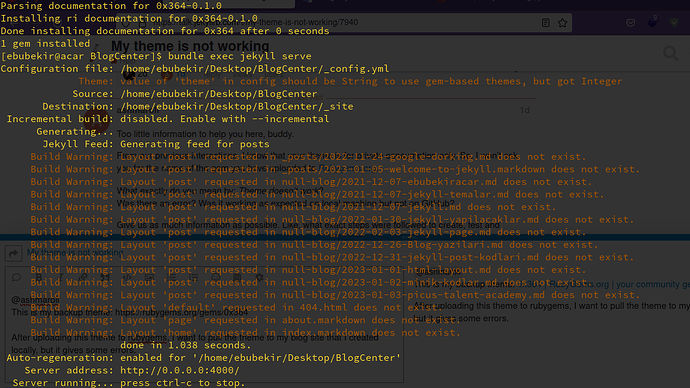 It is best to try after making all the settings according to config.yml. Maybe it’s not a candidate to be a theme yet. So I removed my gem file again. Thanks for everything

@rubymuby The answer is in the first error message:

The unfortunate choice of name for your theme-gem resulted in theme: 0x364 being (correctly though) parsed as a number by the YAML parser.

To rectify, quote the name in your config file:

It is recommended to adequately test a gem before publishing it. To do so with a theme-gem repository (with a valid *.gemspec file), use Gemfile and Bundler.

@ashmaroli
Thank you so much . I never paid attention to the errors at the bottom when they appeared more. Thank you very much again