Possible bug with not parsing "<", "&", ">" correctly in code block nested inside of HTML elements

Hi - I’m working with Github Pages and Jekyll and I’ve run into an issue with the characters “<”, “>”, and “&” showing as HTML entities inside a code block when that code block is nested as follows:

This particular case uses <details>, but the shape seems to be what matters, as I ave also reproduced this issue with a <div> as the outermost container.

In my _config.yml I have the following settings on:

In my markdown file I have the following block:

This produces the following: 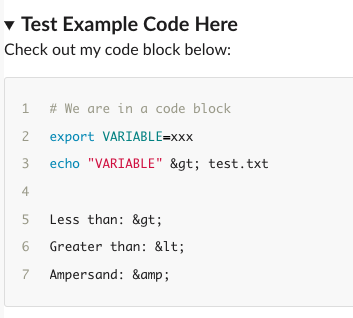 And to fix it, I have to replace the HTML entities before markdownify is used:

Is this a bug? Is anyone aware of another way to do this?

Wouldn’t turning on markdown in the div work, and not require calling markdownify? I.e. (note 1 instead of 0):

Thanks for the reply! I have tried this, and it renders as the following:

I believe this is due to the kramdown parse_block_html setting being set to true.

With parse_block_html set to true, you wouldn’t need markdown=1 or markdownify, since the content of all blocks (DIVs, etc) will be treated as Markdown.

I tried reproducing the problem locally with a new Jekyll 3.9 site, but got the expected results: 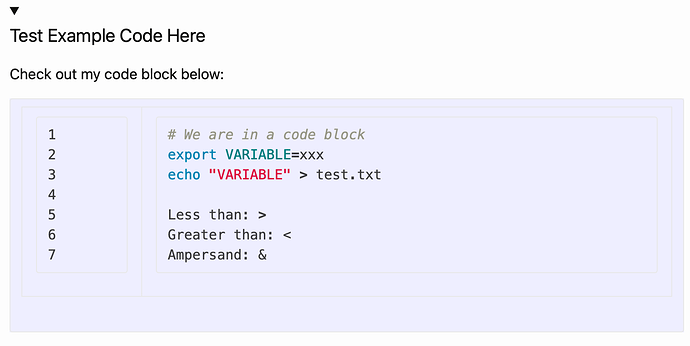 Maybe you could post the generated HTML, which might have a clue to what is going wrong?

The HTML on the page generates as the following: 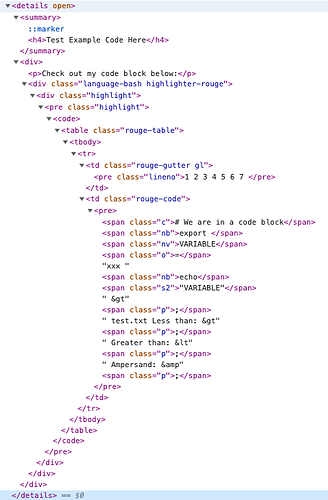 I think the issue might be that the semicolon is being put in a span, possibly as a side effect of it trying to do syntax highlighting in the code block?